Look, I'll say one thing for the superstitious. My seasons at Porto and Inter always started with a draw. In Porto won after four titles and Inter got two in the first season and three titles in the second. This is how it starts is how it ends. I do not see a draw as a drama on the first day. It warned in a press conference prior to the trip to Palma this could happen.
P 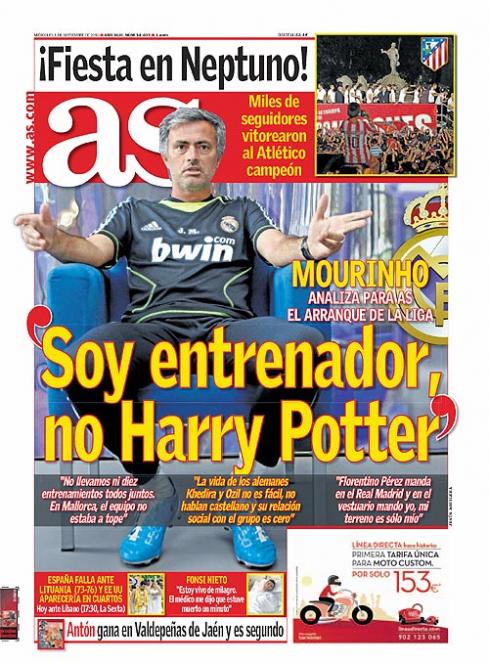 On 31 August 2010, two hours before the transfer window closed, Tottenham Hotspur made an offer of £8m for Van der Vaart. According to Spurs manager Harry Redknapp, an £18m transfer to Bayern Munich had collapsed the day before and Van der Vaart had suddenly became much cheaper.[24] The Premier League were expected to confirm on 1 September whether the requisite paperwork was submitted in time to beat the deadline and hence whether the transfer can be completed,[25] however it has since been revealed that the deadline had indeed been missed by Tottenham due to technical issues preventing the necessary paperwork from being completed and Spurs have since requested special dispensation from the Premier League to allow the transfer to go through sucessfully.[26] It is thought that the technical issues involved the computer servers used in the transaction between themselves and Real Madrid.[27] Real also confirmed that they met the deadline for the transfer but denied Redknapp's assertion that the player was subject of an £18m bid from Bayern Munich, stating that Redknapp's claim greatly surprised them.[27] Redknapp had stated that he is hopeful that the deal will go through,[28] and prior to the transfer being confirmed by the Premier League, Van der Vaart himself said that he was "totally happy" about the deal, during which he will be paid in the region of £44,000 a week.[27] The deal was later confirmed by the Premier League on 1 September, after they gave Tottenham special dispensation for the transfer.[29][2]