Humbled by so Many Positive Reactions

The Internet is really waking up to American Truck Simulator, with first in-depth reviews, videos and streams. So far it looks like we are doing great!

• 8.5/10 from Destructoid - "A memorable game that's hard not to like and recommend to others." also "With two trucks and two included states, and another one on its way, American Truck Simulator is an investment into the series' future, but it's not a steep one and easily earns its value with what is already presented."

• 8.0/10 from PC Gamer - "This is a polished, strangely enjoyable simulator that you can easily lose hours to"

Here is a bunch of search links to let you see what is happening live with the game at the moment on Twitch, Youtube or Hitbox.

We have selected a bunch of note-worthy funny, interesting and useful videos for your viewing pleasure.

See, that's why we alternate places for trailer drop-off!

We cannot forget about our Brazilian community

First Impressions from Keralis over in Sweden

If you are still eager to learn more, don't forget about today's live interview with SCS Software's Pavel Sebor! We understand that Squirrel has assembled a long list of questions from fans about the past, current and future of both American Truck Simulator and Euro Truck Simulator 2. Set your alarm clock to 8 pm CET, 7 pm UK time, that's 2 pm on the US East Coast and 11 am in California.

The launch process was even smoother than we had hoped, so we are happy to announce that American Truck Simulator keys will now activate the game, and that it has become visible and ready for purchase on Steam.

Actually the start is promising, we have good visibility for the game on the front page. 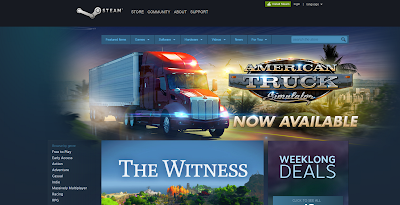 We are only hours away from the release of American Truck Simulator!

The official street date is February 3rd, but as we see it, it would be too cruel to let you wait until tomorrow morning.

We were thinking of unleashing the game at midnight Prague time. However, going through all the release process late at night and staying on alert for a while after the game gets out to see if no hot-fixing is needed immediately takes some hours. The release crew would not get to bed before 4 am.

So here is the plan: We will start the release process this evening already (CET time zone), and while we are not sure if we'll need an hour or three to press all the buttons that must be pressed, we expect that the game will unlock a few hours before midnight already. Both the keys sold in digital channels as well as keys in retail boxes will start working at the same time. Looking at the clock now, you should be able to play the game in less than 12 hours!

We'll be updating you on the situation through our communication channels, watch our Twitter or ATS facebook for quick updates.

We are snowed-in by a ton of questions and requests for clarification from fans, and it will be best to respond to them once here in an official statement rather than trying to reply to every e-mail.

To make sure that we don't have to make compromises down the line, stuck forever with a guarantee to support a build of the game with 32-bit limitations, we have decided to officially only support 64-bit Windows/Linux/Mac. There are some performance benefits too, but most importantly this will allow us to cross the 2 GB barrier for in-game assets when we need to, without worrying about how to work around the limitations of addressable memory on a 32-bit system.

However, we are receiving a lot of requests from players stuck with a 32-bit Windows to give them a chance to play the game now. We do listen to you, and we are also making available an UNSUPPORTED, alternate 32-bit build of the game. You will find it on Steam, in a Beta branch named unsupported_32bit. At the time of release, it will be functionally equivalent with the 64-bit build, and it should work ok so long as you don't push the graphics setting to max. Keep in mind that it's only an unsupported temporary solution, we are explicitly making no guarantees that it will work now or in the future. At some point in time, perhaps in 6 months, perhaps in 12 months, we will no longer be able to update this 32-bit fork of the game to match the feature set of the official version of the game. Hopefully by that time, you will all have migrated to a new 64-bit OS.

The game is released for Windows, Mac OSX and Linux. It will require Valve's Steam platform to install and activate. Whether you buy it directly there, or purchase an activation key from the official game website, find it in a box from a bricks-and-mortar store, or get it from any other digital channel, you will always be getting a Steam key.

We know that not everybody is comfortable with the decision, but for us the benefits are very clear. We will be able to concentrate on improving the game itself, and will not have to lose time and focus maintaining an alternate update and account infrastructure. With Steam, pushing out an update of the game is a matter of one button press. We can take advantage of Steam Workshop to have a central repository of mods, and will not have to create and moderate our own alternate solution. We would really have a hard time having to create our own system to sell, deliver and update game DLCs with equal robustness to Steam's proven infrastructure. We hope that you will understand why we are making this choice.

Speaking of Steam and the benefits its system allows us to provide... We would like to remind you about an exclusive steam-punk paint-job bonus DLC. It can be yours in exchange for following us on American Truck Simulator Steam page. We are going to give early purchasers of the game a few extra days to allow them a chance to earn this bonus. Next week, the game will auto-magically update itself for all active followers to add these beauties: