Speaking to Calciotoday.it, Mirabelli poured scorn on the current hierarchy at the club.
“When I was there we knew who was in charge,” Mirabelli told the website.
“There was no confusion and the results were there. We went into the Europa League, we came close to getting into the Champions League, and made it into the final of the Coppa Italia against Juventus.
“The regret is that we didn’t have time, I hope that now the directors continue the work I started.
“A new revolution would be wrong, rumours destabilise the environment and Stefano Pioli is not allowed to work quietly.”
Milan signed Zlatan Ibrahimovic in January in a bid to turn the Rossoneri’s season around.
“Ibra has undoubtedly given something important, even to young people who saw him perhaps only in sticker albums.
“However, I would not like it to only be a momentary thing. The weight cannot go entirely on the shoulders of a 38-year-old, albeit a champion.” 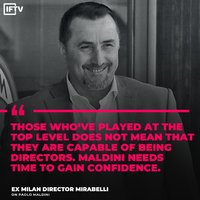 There were reports that Musacchio refused to play on Monday night against Torino, but Pioli put those to bed.

“No case, he had a hardening in the calf. In the Italian Cup he had to play, but then he felt a discomfort in a calf muscle and therefore I played Kjaer. If he had refused to enter, he would not have been called up for tomorrow.”

Sent from my MI 5 using Tapatalk

Sent from my VTR-L09 using Tapatalk