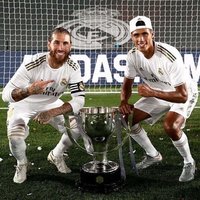 "If I had left this summer, it would only have been for Real Madrid."

"Initially, I had asked for a period of reflection. Before the Euro, I told the club that I didn't want to extend, and after the Euro, I said that I wanted to leave."

"The club decided not to sell. I was OK with it. I continued to play throughout August, I was performing. I had no problem with that, I am still in a great team and a place where I have been happy for four years."

On forcing a move: "No, because that would have been ungrateful. It wouldn't have been grateful to a club that welcomed me at 18 and gave me a lot for four years."

"When your president says in front of the whole world that you are not going to leave and not go free... At the time, I was a little worried, I am not going to lie to you. I said to myself: 'If I don't go free, what will happen to me?'"

"I thought my adventure was over. I wanted to find out something else. I had been in the French Championship for six or seven years. I gave what I tried to give to Paris and I think I did it well."

"Arriving at 18 and doing everything I did, I think that was something remarkable. Afterwards, everyone is free to draw the conclusions they want but that was my assessment. Leaving was the next logical step."

"At no point in the season will you see behavior like, "You didn't let me go, I'm going to take it easy." I love football too much and I have too much respect for the club, and for myself, to ease off even one match."

On leaving next year: "I have been long enough in football to know that the truth of yesterday is not that of today, nor that of tomorrow. If I had been told that Messi was going to play for PSG, I would not have believed him. So, we don't know what can happen."

"I think I had to explain myself. I had to end this silence and I said I would. I owed that to the supporters, the football fans and the people who read me."

"I could not speak during the summer, it was not possible. Now the summer is over, I have to make a tune-up, I think it's a good time."

What could make you stay in Paris?
"We are far from it, since I wanted to leave this summer. I'm not going to be the hypocrite and come and throw a bottle in the sea, like, 'Oh, I don't know.' Currently, my future is not my priority. I've already wasted a lot of energy this summer, and it was exhausting."

Were you disappointed to stay?
"At the time, a little. When your ambition is to leave and you have to stay, you're not happy. But I quickly moved on."

On if the arrival of Messi changed something: "No, I had made my decision and it was well considered."

SanIker напиша:
On leaving next year: "I have been long enough in football to know that the truth of yesterday is not that of today, nor that of tomorrow.
Кликни за повеќе...

Mbappé's mother surprises: "The negotiations for the renewal are going well"

Kylian Mbappé's soap opera at PSG could end with an unexpected ending. Fayza Lamari, the player's progenitor, has confirmed in an interview with 'Le Parisien' that they are still negotiating a renewal with the Parisian team and that things are going well . In the interview, Mbappé's mother assures that her son can change his mind overnight.

"We are currently discussing with PSG for a renewal and things are going well. I even spoke with Leonardo last Monday. After that, will we find a solution? One thing is for sure: he will give everything to the end to win the Champions League. Kylian needs to be satisfied. If he is not happy, he is able to say that he is going to leave his career. And he often tells us (smiles). With Kylian, everything can change overnight , " says Lamari when asked by a reader of Le Parisien on the future of Mbappé.

PSG, for its part, remains focused on the goal of doing everything possible to retain Mbappé . Not even the player's words in L'Équipe and RMC Sport, stating that he wanted to go out in the summer , have been able to stop Leonardo and Al-Khelaïfi, who keep their confidence intact to reach an agreement with one of the cornerstones of the project. Yesterday, RMC Sport assured that, in the coming weeks, PSG will send him a new renewal offer that would make him the highest paid of the squad, even ahead of Messi and Neymar.